The Windows is one of the best desktop operating system series from the Microsoft. You might use the same Windows Operating system in your office and home computers. If you are working in the office, then using the same computer over and over again, with that same theme and the wallpaper is quite dull.

Thanks to the RainMeter software, you can customize your Windows computer Desktop and customize it according to your needs. The RainMeter is counted as one of the best Desktop customization software for Windows, and you must install it on your computer. The RainMeter app comes with tons of customization features and themes to install on the computer. In this post, I am going to share the list of some of the best Rainmeter Skins and Themes, which you should download and start using immediately.

Here, I am listing the best RainMeter Skins and Themes for Windows 8.1 and 10. You can download these themes on your computer and then apply them using the RainMeter software.

If you are looking for a simple and minimalistic skin or theme, then the Eker Lina RainMeter Theme is the best suitable for your desktop. The Eker Lina RainMeter theme is a favorite RainMeter theme, many users love. This theme shows the disk drives, system folder, folders, shortcuts and also the weather details of your city. The alignment of these folders and widgets is proper and makes your desktop look clean and simple.

In the PILEUS Suite, you can find the Disk Drives icons, Files, Folders and also the RSS Widget, Power Status and the Digital and Analogue clock widget. The PILEUS Suit theme for Windows is highly customizable and has the best User Interface.

The JARVIS is one of the most popular themes for the Windows computers as there are too many fans of the Iron Man Superhero Movie series.

If you work mostly in the night, then the Darkness Falls is an excellent theme for your eyes as it will not hurt your eyes with bright colors.

The Obsidian is one of the best SkinMeter Skin for the Windows operating system. The Obsidian Theme is different from the other themes, as it includes the various user interface and the fonts. On the Obsidian Theme Desktop, you will see every folder and the files located on the desktop are aligned in the Steps like structure. This may look pretty weird at first glance. Every icon, widget, and folder located on the Desktop is arranged in the grid like structure, which is very helpful to navigate.

The Razor is a glossy and modern desktop theme for RainMeter. You will see that it has that bright look with the Razor like effect. Just like other themes, it comes with the useful features like the Power Status Widget, Weather Widget, Files and Shortcuts on the desktop, etc. The Razor Skin for RainMeter is highly customizable according to your needs. You can add more widgets or remove the current widgets to make this theme look cool.

The ABP V 1.2 is a unique and straightforward RainMeter Skin for Windows 8 and 10. The ABP V1.2 is quite a Classy Theme for your Windows Desktop. It has the grid-like structure for arranging the items of the Desktop. The ABP V1.2 has the customizable color theme, which is excellent for those who do not love the default colors.

The Horde is a dark and straightforward theme for RainMeter users. The Horde comes with the bunch of widgets and the icon pack, which has the dark shade. Just like the “Darkness Falls” theme we mentioned above, the Horde is a theme with dark tint and only for lovers of Darkness. This is not an unusual theme if you are expecting too much from it. It is a simple theme that you should install if you are a lover of Minimalistic things.

Love the Space and inter-galactic imagination? Well, this RainMeter is for you. Space is the very fancy RainMeter theme, which has all the space and galactic elements on the desktop. In this Theme, you will find the icons and user interface are modified with the theme of Spaceships and the out-of-the earth elements. If you are a space lover, then you should install this fantastic theme.

The Galaxy Suite RainMeter is another fantastic theme for the Astronomy lovers. The Galaxy Suite for RainMeter is one of the cleanest Themes for the Windows. You can see that the theme is clutter free and also has the very useful feature that is going to enhance the UI. The Galaxy Wallpaper, Sleek icons and the Sharp-edged widgets add a special touch to it.

Want a Sleek and High Contrast theme? Well, the Encoded theme for RainMeter is the multi-colored theme which has the four colors contrasting each other. The Red, Black, Grey and White colored sections of this theme give it eye-catching beauty. It comes with the bunch of useful widgets, mainly the Music Player widget.

Want a theme that resembles the MacOS? The MoonGlow Theme for RainMeter is identical to the MacOS interface. Widgets on both sides of Desktop, Dock with all of the apps and shortcuts in the center and also clutter-free user interface makes it the same theme to Mac OS.

The Morph is the Classic theme with the Retro effect to it. It is identical to the MoonGlow theme which is shared above. However, the Morph skin for RainMeter has the Retro impact to it. It comes with Retro icons, interface and also the wallpapers, which reminds us of the Linux and Mac UI from their early days. The Morph Desktop for Windows is highly customizable with the option to choose from tons of widgets.

The combination of the Orange color with Black color always creates the beautiful shade of color. The Orange Glow theme for RainMeter software has the same Orange and Black color combination. Instead of saying Black, I can call it Dark. The Desktop is filled with the Softwares, Shortcuts and the files that you have stored on the Desktop. Also, it shows the frequently used apps for easy access. The Digital Clock on the Right side will give it an awesome look.

The Raleway is a minimalistic theme for Windows 8.1 and 10. This is the best Nature based RainMeter skin I have ever used. With the minimalistic icons and nothing else on the Desktop makes it an attractive theme. In the center of the Raleway Desktop, you can see the Softwares and shortcut icons. On the Right and Left corners, you will see the Temperature or any other widget and the Digital Clock widget. Just these three elements combined make these theme a perfect for your Windows Desktop.

The Rising Reflection theme resembles the Linux Ubuntu user interface. The Linux Ubuntu had the cluttered and slow desktop environment, but this theme for RainMeter is pretty well optimized. The Rising Reflection is highly customizable theme with the sidebar on the left side, which contains all of the software shortcuts. There is nothing else of the Desktop except the Sidebar of shortcuts and the Digital clock. Users can edit the theme later according to their convenience. 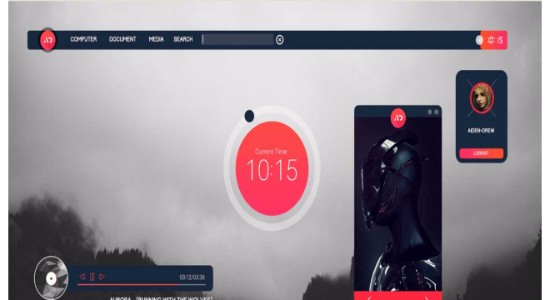 The Senja Suite is TV, or Anime Character based rainmeter theme. In this theme, you can customize the TV or Anime character you like in the skin settings. The Senja Suite is quite popular RainMeter theme with widgets like Digital and Analogue clock, Image Slideshow and Music Player widget.

The ALIENS RainMeter theme is also one of the futuristic themes made for Windows Desktops. The ALIENS theme is based on the imagination of the Aliens as seen in the movies and documentaries. The color scheme of these RainMeter skin is fantastic and makes this theme attractive. The icons, Layout, Fonts and every other thing are designed while imagining the Aliens. The Desktop may look cluttered after applying this theme, but you can customize it according to your needs.

How to Install RainMeter Themes On Your Computer?

Some people may get confused while installing the rainmeter theme. Here is the exact tutorial with all of the steps to Install RainMeter Skins on Windows.

So, these are some of the best RainMeter Skins and Themes for Windows 8 and 10. If you are bored of using the same computer with the same UI for a long time, then you have to install the RainMeter software and install the skins to get the fresh look to your desktop.